Tim Sykes is an entrepreneur and penny stock expert born in Orange, Connecticut, in 1981. He began trading at a young age when his parents gave him full control of his bar mitzvah money while he was still in high school. His parents thought losing the money would teach me a good lesson. As everyone knows he eventually turned $12,000 into $2 million trading thousands of penny stocks during his studies at Tulane University. As of 2019, Sykes has an estimated net worth of $20 million. His wealth has been accumulated mainly through stock trading and his educational business. Some of his most profitable business ventures include Profit.ly, StocksToTrade and Investimonials.

Due to his success at an early age family and friends wanted him to invest on their behaves. This led to Tim starting a hedge fund called the Cilantro Fund during his senior year of college. At its peak, the fund only had $3 million under management because short selling penny stocks isn’t a scalable strategy. You could make $1 to $3 million per year shorting small caps but not $10 million like big hedge funds aim for. Initially, it was successful with Barclay Group rating his fund as the top short biased hedge fund from 2003-2006 and was listed in Trader Monthly’s ”30 under 30” as of the top upcoming traders on Wall Street. As you would imagine his unique story attracted a lot of media attention and he ended up starring in season 1 of the highly popular Wall Street Warriors reality program.

Sykes was portrayed as the jackass of the show and has said in interviews he was drunk during most of the filming, as his hedge fund wasn’t doing well. Tim started investing because he was unhappy with his fund growing at 20% per year. He closed the fund by the end of 2007 after losing 1/3 third of its value due to one bad investment in Cygnus E-Transactions, a company that was owned by his friend’s dad. After the series aired, he started receiving hundreds of emails every day from people wanting to learn about his penny stock strategy. This inspired him to write a book titled “An American Hedge Fund: How I Made $2 Million as a Stock Operator & Created a Hedge Fund”. (the PDF of the book was released for free online by Tim).

After Wall Street Warriors, Sykes continued day trading and was ranked number one out of 60,000 traders on Covestor, a platform that verifies trader’s performance. He then launched his blog timothysykes.com to share his knowledge on trading penny stocks. Through blog posts and videos, he exposes businesses and celebrities involved in pump and dump scams. Justin Bieber and Shaquille O’Neal are just some of the celebrities he has publicly shamed for their involvement in pump and dump schemes. This was a clever marketing strategy that attracted thousands of visitors to his website. Due to demand, Sykes created multiple newsletters to cater to every trader from beginner to advanced. As of now, Sykes has three newsletters Tim Alerts, Penny Stocking Silver and Tim’s Millionaire Challenge. 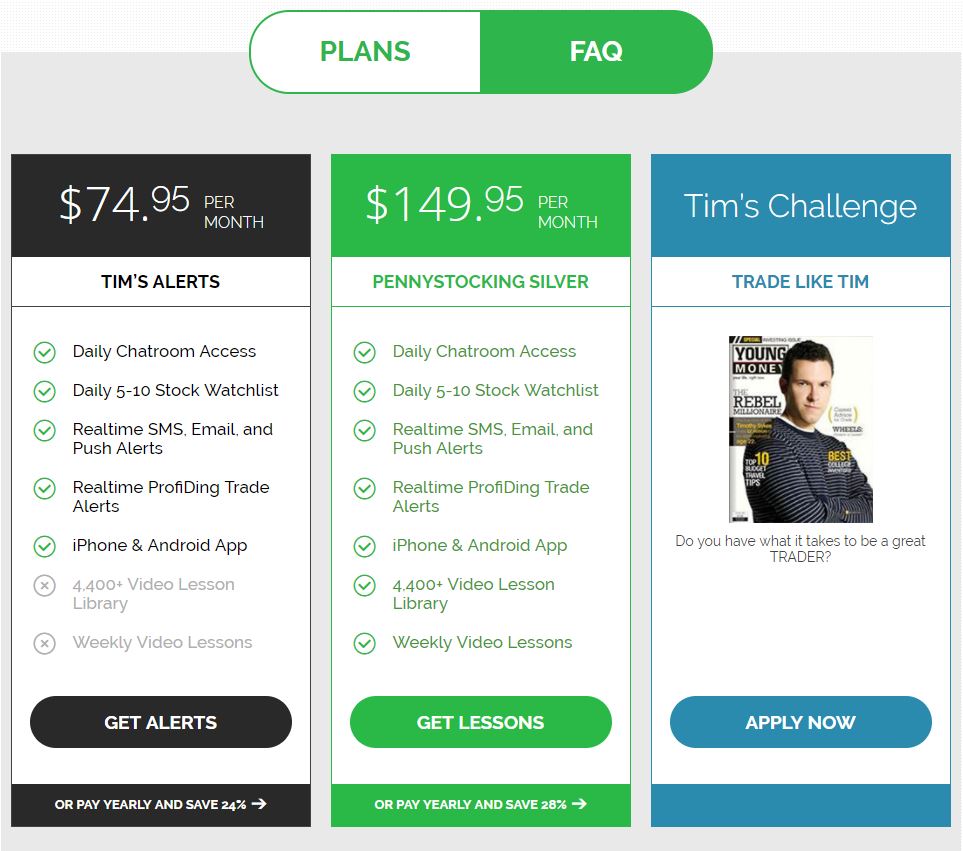 Tim has made $4.9 million from trading alone but makes the majority of his income from educating others through his newsletters, conferences and DVDs. His DVDs are expensive but mandatory if you want to learn his strategy. Check out his store for promotional codes and search eBay to get the best deals. Paying full price is not necessary because past students sell them for a fraction of the price on eBay. In the past, DVDs could be downloaded for free on torrent sites but are no longer available. Below is the latest list of dvd’s to purchase from the Profit.ly store.

Millionaire Student Challenge Worth the Price?

I recommend signing up for penny stocking silver first because its more cost-effective for new traders starting off.

Is Timothy Sykes a Scam?

As you would expect there are a lot of traders sceptical of his story of turning $12,000 into $4 million. Over the years Tim has attracted haters because of his marketing style to attract new customers. His Instagram account advertises his extravagant lifestyle, pictures of flashy cars, stacks of money and vacations in exotic locations. Advertising a lifestyle, everybody wants to live. People often wonder if Tim is a fraud? Are his trading profits fake? Does he only make money selling products? I personally don’t think Timothy Sykes is a scam. Just because he makes more money teaching instead of trading it does not make him a scam artist. He has helped create multiple millionaires through his teachings. While he’s not solely responsible for their success, he played a big part. Examples of successful students include Tim Grittani, Steven Dux, Mark Croock, Tim Bohen, Jane Gallina and Roland.

Timothy Sykes is a real guy, he responds to emails and his service is legit but expensive. His trading profits are real and are verified on Profit.ly. Tim makes crazy money trading penny stocks, he can have $1,000 days, but the real question is can he teach you to make the same kind of money? Your overall success depends on how determined you are to learn his strategy inside out. The majority of members join with such high expectations of becoming his next millionaire student, but the reality is they won’t come close. I don’t like being critical of Tim’s service mainly because he’s a cool guy, works his butt off and brings transparency to the corrupt world of penny stocks. To appear less scammy he should alter his online advertising to appear like less of a douche bag.

The main reason why the vast majority of people join his newsletters is that think they will be able to just copy his alerts and bank easy profits. This won’t work because penny stocks move too fast and have big spreads. This means the odds are against you right from the start by copying his alerts, especially if you are getting in at a price 0.20 higher when he buys and 0.20 lower when he short sells. Don’t copy his trades like his other gullible followers. The alerts are there for guidance and to help people become independent traders. You won’t have to rely on Tim for ideas. Learn for yourself how to scan stocks, build watch lists and the best chart patterns to follow.

How Much Money Do You Need to Start Trading?

You need at least $2,000 to start because broker fees will add up over time. To avoid the dreaded pattern day trader rule you need over $25,000. To get around the rule most people open up multiple brokerage accounts to place more trades. Split $10,000 into five different accounts and you can make 20 trades in five business days. Avoid using offshore brokerages such as SureTrader because they’re not reliable. It’s difficult to grow an account with the PDT rule, as you can only make 4 trades in a week. This also slows the learning process because the best way to learn is by using real money instead of paper trading. When Tim Sykes grew his account to over a million dollars the PDT rule wasn’t around. Etrade is the broker Sykes recommends for short selling and finding shares to borrow. Tim also uses a high net worth brokerage where the minimum is $30,000.

Love him or hate him; Timothy Sykes is here to stay. While you may not like his personality, he brings transparency and entertainment to the penny stock market. While his courses are expensive, this is the price you have to pay to learn from the best penny stock traders. Join for the education and not to get rich quick. Surround yourself with experienced traders and you will become a better trader yourself.

This site uses Akismet to reduce spam. Learn how your comment data is processed.

TrendSpider Review 2020 – How Powerful is this Software?

TrendSpider Reviewed Investors who swear by technical analysis don’t usually pay too much attention to the fundamentals of a company....