Timothy Sykes is a well-known penny stock trader and entrepreneur. The self-made millionaire has become synonymous with the world of penny stocks and day trading. A large part of this is down to his non-stop marketing and how he promotes himself on social media.

Hopefully in my review, I can help you decide if signing up for his service is worth the time and money.

Born in Orange, Connecticut, in 1981, Tim began trading at a young age when his parents gave him full control of his bar mitzvah gift money! Thinking he would lose it all, his parents wanted to teach him a lesson about money.

Little did they know, they created a monster! Tim would later turn that sum of $12,415 into $1.65 million trading 100’s of penny stocks during the dot-com bubble. Due to his success, family and friends wanted him to invest their money. This led to Tim starting a hedge fund (the Cilantro Fund) during his last year at Tulane University.

At its peak, the fund only had $3 million under management because short selling penny stocks isn’t a scalable strategy. It’s possible to make $1 to $2 million per year shorting penny stocks not tens of millions.

Sykes was listed in Trader Monthly’s ”30 under 30” in 2006 as one of the top traders on Wall Street. As you would imagine his unique story got a lot of media attention which led to him starring in season 1 of Wall Street Warriors, a popular reality TV show.

When the series aired, hundreds of people emailed him wanting to learn about penny stock trading. Later this inspired him to write a book titled “An American Hedge Fund: How I Made $2 Million as a Stock Operator & Created a Hedge Fund”.

After Wall Street Warriors, Sykes continued day trading and later launched his blog timothysykes.com. Due to strong demand, he created multiple newsletters to cater to every trader from beginner to advanced.

As of now, Sykes has three subscriptions – Tim Alerts, Pennystocking Silver and the Millionaire Challenge.

Tim Alerts is the most basic plan. For $74.95 per month Sykes offers access to the chatroom, a daily watchlist of 5-10 stocks and real-time alerts. The only problem is the 4,400+ video lesson library isn’t included with the subscription.

If you’re new to stock trading, the training videos are a big loss. Most people also join thinking they can just copy alerts and bank easy profits. This won’t work because penny stocks move too fast. Don’t copy his trades as some gullible followers have done before.

The alerts are there for guidance to help people become independent traders and thinkers. Learn by yourself how to do technical analysis, scan for stocks and build watchlists.

For new penny stock traders, Pennystocking Silver is the most suitable plan. It includes features from Tim Alerts plus access to a massive library of 4,400+ video lessons and new weekly video lessons.

While it would be time-consuming to watch all of the lessons, the lessons are full of wisdom. This is why Tim recommends studying the past to profit from the future! The patterns he teaches can be predictable and tend to repeat themselves a lot.

Millionaire Challenge: Is it Worth the Price?

The millionaire challenge is Tim’s premium course, designed to provide more advanced training to students serious about investing in their education.

Be warned though the challenge is pricey and costs a whopping $6,000. Before joining, you will need to apply for an interview to assess if you’re suitable for the program. 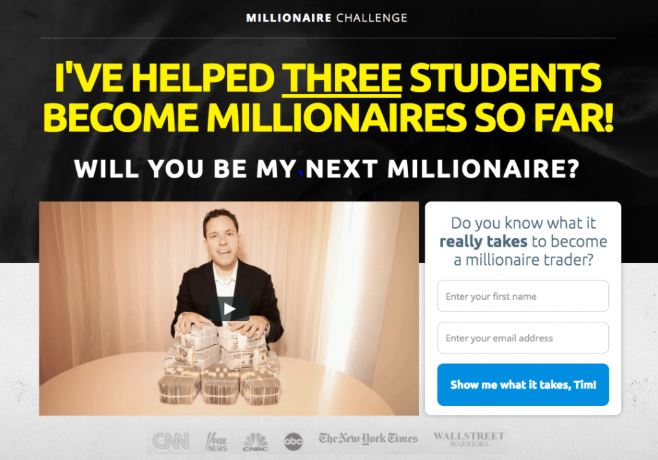 I recommend signing up for Pennystocking Silver first because it’s more cost-effective for new traders starting off. It doesn’t make sense to spend $6,000 without even knowing the basics of penny stocks.

Tim has made $6.1 million from day trading alone but now earns the majority of his income from running a trading education business. The DVDs are expensive but mandatory if you want to learn the strategies.

Check out his store for discount codes and it might be worth searching eBay to find old students selling DVDs. In the past, DVDs could be downloaded for free on torrent sites but are no longer available.

List of Tim’s best DVD’s to buy on Profit.ly:

What is Tim’s Strategy?

Sykes main strategy involves short selling over hyped penny stocks and profits when they fall in price. A strategy that is risky unless you’re experienced because these stocks are volatile. Tim uses technical analysis to identify predictable chart patterns to improve your odds of success on trades.

An example of a chart pattern he likes is the first red day pattern. If a stock has been green for several days and then closes the day red, many traders will soon sell causing the stock to fall. If you short on the first red day, it has the potential of multiple red days meaning more profits. The key here is waiting for momentum to shift before you make your move.

Sykes also likes to profit from buying breakouts, he runs a special newsletter ‘Supernova Alerts’ to focus on this strategy. Overall his techniques are more suited for smaller accounts, not those with millions of dollars to invest.

Is Timothy Sykes a Scam?

As you would expect there are a lot of traders skeptical about his story. Over the years Tim hasn’t had any trouble attracting haters because of the way he advertises online. His Instagram account advertises an extravagant lifestyle, flashy cars, stacks of money and exotic vacations. A lifestyle, everybody wants to live.

People often wonder if Tim is legit? Are the stock trading profits fake? Does he only make money selling products? I personally don’t think Timothy Sykes is a scam. Just because he makes more money teaching instead of trading, it does not make him a fraud. Business is indeed booming for Sykes as he does have a net worth of $15 million!

He has helped create multiple millionaires through his teachings. While he’s not solely responsible for their success, he played a big part in getting them started.

“I am a student of Timothy Sykes through his Millionaire Masters Program and Market Mastery 2020. I believe in investing in your education and setting high goals as you are bound to reach further than most could imagine.

If you apply for his challenge and ask for an email of what the is included, you will have access to more than what is listed in this post. It is worth the price as I wrote a blog post explaining how the challenge is actually a deal that saves you money in the long run.

Also, the PDT rule is there to protect new traders from over trading and blowing up their account. A majority of Tim’s students began under this rule and it has helped them with their discipline. I absolutely LOVE being a student and I recommend joining. Investing in your education holds you accountable and drives your motivation to reach your goals of success.

There are over 6k+ video lessons under Pennystocking Silver and I have watched over 4k+ and counting. In the challenge you have access to more student webinars than listed in this post. I highly recommend dedicated students emailing Timothy Sykes’ team and requesting information or asking questions if you cannot find the information you are looking for on Profit.ly.

They are very friendly and happy to help. It may take some time for them to respond as they are so busy, but becoming a VIP student of Tim’s when applying for his challenge will give you front row seats.

I am also a VIP student. Overall, Tim is a wonderful teacher and I am having success with his strategies and learning to become self sufficient! I could write forever about how this is an opportunity of a lifetime!”

How Much Money Will You Need to Start?

It’s advised to start off with at least $2,000 because broker fees will kill your profits. To avoid the pattern day trader rule you need to deposit $25,000. To get around the rule most people open up multiple brokerage accounts to place more trades.

E-Trade and Interactive Brokers are the top two brokers Sykes recommends to students. Ultimately it doesn’t matter what broker you pick as long as you get solid trade executions and cheap commissions.

Timothy Sykes is the real deal, he’s been interviewed by the likes of Larry King and Steve Harvey. His trading profits are real and have been verified on Profit.ly.

He can have $1,000 days, but the real question is can he teach you to make the same kind of money? Your overall success depends on how determined you will be to learn the strategies inside out. Join for the education and not to get rich quick. Surround yourself with experienced traders and you will become a better trader yourself.

Penny stock newsletters can be a useful resource for investors who don't have enough time to find stocks to buy....